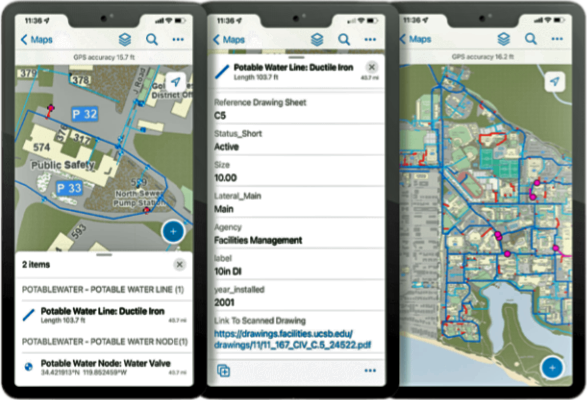 Having inherited much of the university’s 1950s-era underground utility lines from its former life as a military base, UCSB staff had previously managed and mapped the growing coastal campus using 500-by-500-foot grid drawings. Crews carried heavy rolls of drawings with full-size sets to conduct work orders and locate underground utilities.

Beginning in the early 2000s, however, UCSB staff collaborated with consultants to scan and index over 40,000 drawings. Around the same time, the hand-drawn utility atlas sheets were digitized and input into a computer-aided design (CAD) file system. It would be the beginning of a yearslong effort to streamline utility operations at the university.

“GIS lets us ask questions of our data now,” said Bartsch. “We can determine whether we have the capacity to add another building on campus, whether we need a new utility line, or find the most efficient way to spend money so we can prioritize limited funds.”

Bartsch first aimed to ensure that all available utility line information was accessible to staff working on service lines and completing work requests. Knowing that many staff previously worked with static maps and record drawings, Bartsch created a resource in which they could access static files and scanned drawings. Static maps, as well as additional information about a specific utility, are still available and updated regularly.

“There’s so much information on the drawings it would nearly be impossible to add all that information as attributes of the lines,” said Bartsch. “By linking those drawings to the utility line information, it is a simple way to have all that data in our GIS without inputting it directly and increases confidence in our data integrity.”

With this database available, Bartsch then used ArcGIS Pro to build a comprehensive utility atlas. Separated into more than 200 grids, each containing downloadable PDFs, the atlas mapped UCSB’s underground in an accessible digital resource, including aerial imagery, a full-color map sheet, and line work. The atlas is updated each month.

“The challenge of paper-based systems is that as soon as a project comes along, the information on that paper is outdated because it might be replaced or modified,” said Bartsch. “With a GIS atlas, we now have a living view of what is actually in the ground, so it’s an ongoing, updated model.”

Moreover, utility technicians can keep the atlas updated on the fly with ArcGIS Field Maps. If a water valve needs to be replaced, for instance, technicians can note it in Field Maps or add an image instead of creating a new drawing to account for the update.

Taking GIS to the Surface

Now Bartsch is looking to expand the geodatabase and the lessons he learned from building the utility atlas to create an indoor asset management resource.

“There is so much more you can do with GIS, and it doesn’t all need to be done in one project,” he said. “Many of our HVAC [heating, ventilation, and air conditioning] systems are still static snapshots in time. There are use cases for applying this same type of model that we are doing outdoors and underground, inside.”

Bartsch believes the utility atlas can benefit other areas of a university campus, including access to a basemap of the university and data from geotechnical reports.

This previously collected data is updated using ArcGIS Pro and ArcGIS Field Maps and used for the implementation of new projects. Using pole lighting data, for instance, Bartsch repurposed the information in ArcGIS Field Maps as part of an effort to reduce light pollution. 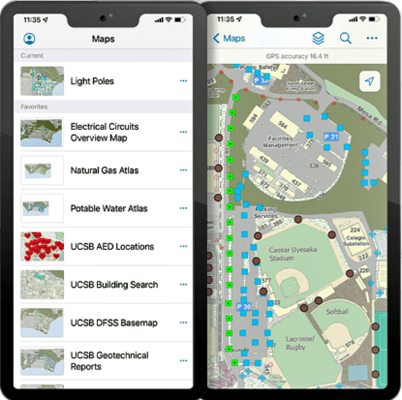 Various maps for different utilities or data captures can be accessed with ArcGIS Field Maps.

“I have learned, over the years, that every single piece of collected data lives on and has more than one use,” said Bartsch. “A lot of our geodatabase is customized, but I have made a concentrated effort to make things interchangeable. We store everything collected.”

For Bartsch, the possibilities of GIS at UCSB are endless, and he believes his model can be replicated and tailored to benefit other universities. “We now have the ability to evolve a ‘living model’ on campus by tying multiple data types together. We no longer have just a snapshot in time.”

This article originally appeared on Esri.com.

Cassandra Galindo is a passionate storyteller who loves to leverage the written word to share unique stories in the world. With a bachelor of arts degree in creative writing from the University of California, Riverside, and experiences in journalism and public relations, Galindo joined Esri's content writing team in 2020, where she crafts compelling customer success stories. Outside the office, her hobbies include reading, yoga, and enjoying a good hike on the many trails southern California has to offer. On a good day, she is a connoisseur of iced coffee and writing powerful stories.

END_OF_DOCUMENT_TOKEN_TO_BE_REPLACED 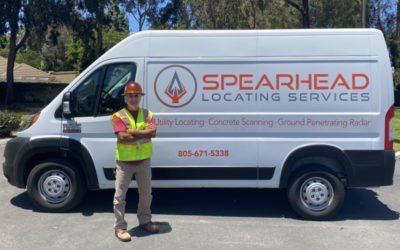 We bring you the latest news and updates about utility locating and what Spearhead Locating Services is doing to better serve you, our customers.

END_OF_DOCUMENT_TOKEN_TO_BE_REPLACED 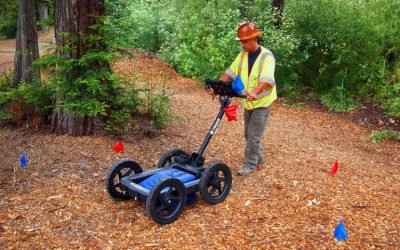